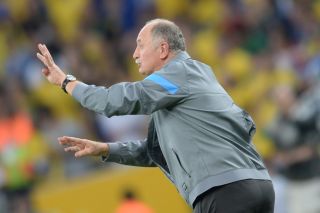 Luiz Felipe Scolari's men were far from their fluent best in the fixture held at the Beijing National Stadium on Tuesday.

However, after a goalless first half, Chelsea midfielder Oscar came off the bench to open the scoring with a deflected effort.

Shortly after the game was put beyond all doubt when Dede notched his first international goal with a close-range header.

Liverpool midfielder Lucas Leiva was handed his first start in nearly two years, while Alexandre Pato and Lucas Moura were also given opportunities.

Patrice Beaumelle was in the dugout for Zambia, after taking control on an interim basis following the departure of Herve Renard to Sochaux.

Brazil almost made an electric start in the third minute when Neymar's sublime free-kick rebounded off the crossbar.

Shortly after, his Barcelona team-mate Daniel Alves hit a half-volley that narrowly drifted over the bar.

On the 15 minute mark a clever one-two between Ramires and Neymar led to the Chelsea midfielder going one-on-one with Kennedy Mweene but he put his effort just wide of the post.

Emmanuel Mayuka was lively up front for Zambia without causing any real issues for the Brazilian defence and only had a tame effort which was held by Diego Cavalieri.

Neymar should have put Brazil ahead in the 37th minute when he looped a header wide from Maxwell's delivery when unmarked in the box.

Brazil started the second half in lacklustre fashion with Scolari visibly frustrated on the sidelines.

David Luiz came close with a 25-yard free-kick but his effort was smartly parried away by Mweene.

The deadlock was finally broken in the 59th minute, courtesy of substitute Oscar.

The Chelsea midfielder cut inside Mayuka on the left before hitting a 20-yard effort that took a huge deflection off Chisambu Lungu and looped over Mweene into the far corner.

As Zambia tired, the game was put beyond doubt in the 66th minute when Dede pulled away from his marker to head home Neymar's free-kick from six yards.

Buoyed by their quick-fire double, Brazil continued to push for a third and Oscar should have done so in the dying stages when after a flowing move he curled an effort straight at Mweene.

But the miss made no difference to the final outcome as Brazil extended their winning run to four matches.

Scolari will now look ahead to Brazil's friendly clash with Honduras in Miami in November.