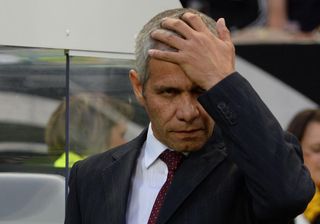 The South American nation, who came into the game having won two of their previous 13 fixtures, fell short in their bid to pull off a late comeback at Changsha's Helong Stadium.

In contrast to their opponents, China have now lost just two of their last 16 matches as they continue to build towards next year's AFC Asian Cup in Australia.

It took the hosts only nine minutes to open the scoring, former Celtic and Charlton Athletic midfielder Zheng Zhi converting from the penalty spot after Paraguay right-back Ivan Piris was adjudged to have committed a foul.

Paraguay enjoyed the better of the second half and almost pulled a goal back in the 52nd minute as Marcos Riveros' free-kick was tipped over the bar by Wang Dalei.

Wang then pulled off a triple save to deny Jorge Rojas, Cecilio Dominguez and Roque Santa Cruz in quick succession.

Substitute midfielder Nestor Ortigoza did halve the deficit in the 81st minute, nodding home after a near-post corner was flicked into his path.

However, Paraguay were unable to find an equaliser as China stood firm.