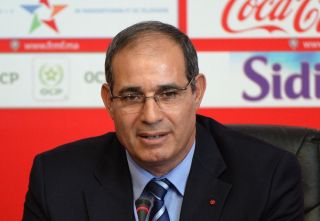 A solitary victory against Mozambique is all Morocco have to show for their last five matches, meaning the upcoming international at the Stade Mohamed V in Casablanca is a chance for Zaki to show he is the right man to take the hosts through to the 2015 Africa Cup of Nations.

Zaki's appointment in May came as a surprise as several big names were linked with the position, including former Zambia boss Herve Renard, Giovanni Trapattoni and Dick Advocaat.

This is Zaki's second stint in charge of the national team after the former goalkeeper led Morocco to the final of the 2004 Africa Cup of Nations, where they lost 2-1 in the final to then-hosts Tunisia.

But any hopes that Zaki has of grinding out a crucial win are hampered.

Zaki will be disappointed he is unable to call on the services of injured defender Mehdi Benatia who has just completed a move to German champions Bayern Munich from Roma for a reported fee of €25 million euros (£19.9m).

"When you get an offer from Bayern then you cannot really say no," Benatia said of his move.

"This is a great chance for me and I will be playing for one of the greatest clubs in the world."

Another Moroccan on the move this week, midfielder Karim El Ahmadi, who re-joined Feyenoord from Aston Villa on a three-year deal, will be available for selection.

That will be a relief to the Moroccan coach as Benatia, goalkeeper Karim Fegrouch, midfielder Zakaria Labyad, defender Achraf Lazaar and forward Marouane Chamakh all withdrew from his squad through injury this week.

Qatar, winless in their last four outings, have no major injury concerns.

Djamel Belmadi's men have played Macedonia, Indonesia, a Swiss League Select XI and La Liga side Malaga in preparation for the Gulf Cup of Nations, to be held in Riyadh, Saudi Arabia in November, and the 2015 AFC Asian Cup in Australia in January.

Following the friendly against Morocco, Qatar will head back to Doha to prepare for three more friendlies against Peru, Uzbekistan and Australia.

Belmadi will be looking for a response from his players after they were comprehensively out-played during their last friendly outing in August, a 4-1 defeat by Malaga in Switzerland.