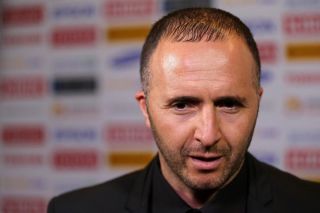 The west Asian nation, who won the rights to host the 2022 World Cup, have drawn their past three games heading into the midweek fixture at Abdullah bin Khalifa Stadium in Doha.

Qatar - 92nd in the FIFA rankings - played out a goalless draw in Morocco on Thursday, having shared the spoils with Indonesia and Macedonia previously.

Algerian coach Djamel Belmadi was pleased with the performance of his players against more-fancied opposition as Qatar - back on home soil - step up preparations for November's Gulf Cup of Nations as well as January's AFC Asian Cup in Australia.

"Despite the good qualities of the Moroccan team, our players were to the task and their performance was really good," said Belmadi.

"It is with such games against strong opponents we could move forward and improve our level both individually and collectively."

"On the technical side, it was a good warm-up match. We knew it was not going to be easy against the Moroccan team, but we were well prepared, we were well represented and we were more dangerous."

While Morocco - ranked 81st - provided undoubted competition, Peru will be a step up in class for Qatar.

Peru, who are 52nd in the rankings, failed to qualify for the World Cup in Brazil after finishing seventh in the CONMEBOL qualifying section but are on a two-game winning streak.

Sergio Markarian resigned in October after he was unable to guide the South Americans to the finals, leading to Pablo Bengoechea's appointment.

Bengoechea oversaw successive defeats to World Cup participants England and Switzerland in his opening two games, but the Uruguayan has enjoyed back-to-back wins at the helm.

After a 3-0 victory over Panama in August, Peru accounted for Iraq 2-0 in Dubai on Thursday.

Though former coach Juan Carlos Oblitas, who occupied the hot seat from 1996-99, was not at all pleased by the standard of opposition.

"First, we face a team of low level. I prefer to play against top competition thousand times, no matter the outcome," said the 63-year-old.

"In matches with Switzerland and England we draw further conclusions."