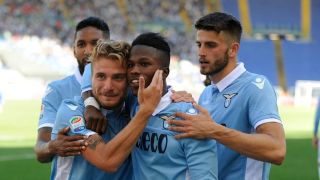 Simone Inzaghi expects signing a new Lazio contract to be a "formality" after his in-form side thrashed Sampdoria 7-3 in Serie A on Sunday to boost their chances of European qualification.

The hosts – who moved to within five points of third-placed Roma – took the lead in the second minute at the Stadio Olimpico as Balde Keita raced into the Sampdoria box to power a shot through goalkeeper Christian Puggioni for his sixth goal in three games.

Veteran striker Fabio Quagliarella struck two late goals to reduce Sampdoria's defeat to a mere four-goal humbling and complete the scoring in a 10-goal thriller, which left Inzaghi looking ahead to a bright future that includes the upcoming Coppa Italia final against Juventus.

"We had a great approach, it wasn't easy. The team won with great credit," said Inzaghi. "It is the group that is making the difference.

"It was right that Anderson took the second penalty, because he was working for the team. The boys gave him the ball straight away.

"The [contract] renewal should be a formality, over the last few days the president [Claudio Lotito] and I have been talking. We will find the necessary time.

"Our approach shows that the team is strong. During the week I made the point that after winning derbies we have always done badly. But now we have closed out the match-point in front of our supporters.

"Now, we will finish in the best possible way and think about the Coppa Italia final. The attackers were excellent and played close together."

5 - Lazio are the only team to score five goals in the first half of two different games in this Serie A. Sprint.May 7, 2017