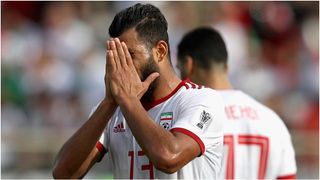 Iran claimed top spot in Group D of the Asian Cup after a 0-0 draw with Iraq, who were also already through to the last 16 of the tournament.

With little to play for it was a tame affair between the sides on Thursday, with few chances of note created by either Iran or Iraq's attacks.

Ahead of the knockout stages, Iraq coach Srecko Katanec will be concerned about the fitness of Ali Faez Atiyah, who briefly left the field on a stretcher during the second half.

Iran's Mohammad Kanani and Iraq's Ahmed Ibrahim recorded the only shots on target of a low-quality first half at Al Maktoum Stadium.

After Atiyah's injury scare, Mohanad Ali Kadhim went close to giving Iraq the lead but his shot from the edge of the penalty area was easily gathered by goalkeeper Alireza Beiranvand.

As Iraq grew increasingly desperate to score the goal they needed to claim top spot, Ali Adnan Kadhim sent a 35-yard effort off target in the 69th minute.

Bashar Resan Bonyan then missed to the left of Beiranvand's goal with another long-range strike as Katanec's side continued to push for a winner.

Beiranvand tipped over a header from Alaa Abbas in the 77th minute, but Iraq could not find a way to break Carlos Queiroz's defence down despite their second-half pressure.

The draw means Iraq finish the group stage unbeaten for the second time in Asian Cup history, last doing so in 2007 when they went on to win the tournament.