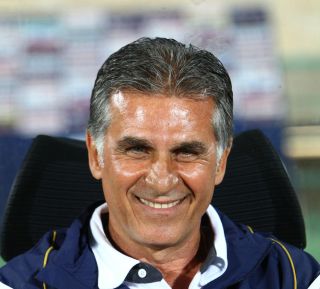 Iran, who have qualified for their fourth finals, were drawn into the group alongside Argentina, Bosnia-Herzegovina and Nigeria, potentially presenting the Asian side with a realistic chance of reaching the knockout rounds.

In each of their three previous World Cup appearances, Iran have crashed out at the group stage and their only finals win to date came in France '98, beating United States 2-1 at Stade Gerland.

However, with themselves, Bosnia and Nigeria all fancying their chances of clinching a top-two spot - likely behind Argentina - Queiroz rallied his men and warned counterparts that Iran will not be in Brazil just to make up the numbers.

Iran rounded off their preparations for the tournament with a 2-0 win over Trinidad and Tobago, but the Portuguese is keen to channel it into a positive performance when they open their campaign against Nigeria on Monday.

"It's always about the next game, never about the last," the former Manchester United coach said. "What they did last Sunday does not matter anymore. Now we will do on Monday.

"Now it's time to believe, to no longer make excuses, explanations or giving up. It's coming on, do the best for their country and try to win the game. The crucial thing is that we did not come here to participate.

"We did not come here to watch the World Cup. Now it's time to fight, play with heart and soul. It's time for Iran to give their best."