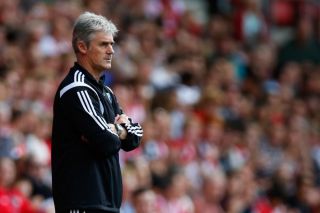 Irvine is still awaiting his first Premier League victory as Albion boss after a low-key stalemate at St Mary's Stadium in which close-season acquisition Brown Ideye made his debut.

The Nigerian was among the chances shortly after coming on early in the second half but was unable to break the deadlock.

Having seen Southampton impress in their 2-1 defeat at Liverpool last week, Irvine was content with getting a point on the south coast.

"I'm very pleased, I thought we were very solid," he explained.

"I saw Southampton playing at Anfield last week and I thought they looked a real threat going forward but we were able to make sure they didn't cut us open today.

"I was pleased with that and how we passed the ball at times. At other times I was disappointed because we gave the ball away a bit too cheaply but overall I was happy with the performance.

"It's a difficult place to come. The boys did the jobs they had to do and did them really well."

Club-record signing Ideye was perhaps the most positive aspect of the goalless draw with the former Dynamo Kiev man going close to a winner on his West Brom bow.

Irvine revealed how impressed he has been with the 25-year-old as well as Australia wideman Jason Davidson, who also came off the bench to make his debut for the club.

"Full marks to [Ideye] because he's only just [arrived] in the country. He's done very little training and Jason Davidson is the same," the Scot continued.

"We've got players on our bench at the minute who aren't ready and they're two of them but they did really well when they came on and I'm delighted with them.

"I'm delighted with where the team is at this particular moment. It's a team that has actually only been together for about two weeks or so.

"Prior to that, we had 10 or 11 players working on a daily basis along with a load of young players. Our meaningful work has probably only happened in the last couple of weeks."