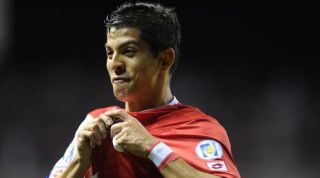 The Costa Rica international only arrived in England last week after being afforded an extended break due to his World Cup commitments and then being forced to wait for a visa.

With that in mind, Irvine is focusing on getting Gamboa up to the required fitness level and revealed that he may not make an appearance until after the international break in early September.

"Yesterday he did a bit more. He did the warm-up, the technical part, did some possession and joined in some shape work that we did.

"But before the game we took him out because we don't think he's ready to take part in a training match yet.

"We will drip him in gradually. He's a good athlete.

"Physically he will get up to speed quickly but he's behind it at the moment, obviously because he's done little training since the World Cup.

"He won't be involved this weekend (at Southampton on Saturday) and it might be a big ask for him to be involved in the game at Swansea.

"So we're probably looking at him coming back after the international break."