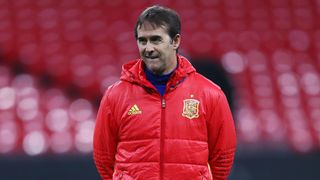 Julen Lopetegui will become Real Madrid's next coach after presiding over Spain's World Cup campaign, and the Opta data provides reasons for optimism among supporters of Los Blancos .

Madrid have been without a head coach since Zinedine Zidane announced his resignation just five days after winning a third successive Champions League title.

Although Zidane's record means he will be a tough act to follow, Lopetegui offers some promise, even if his selection has come as something of a surprise.

Madrid midfielder Isco will be particularly optimistic given Lopetegui's reliance on him with Spain, not to mention his regular praise for the talented playmaker.

If there is one area for concern it will be his lack of trophies at club level, but here we examine the Opta data behind his appointment, and there is plenty to suggest he can make an impact.

20 - Julen Lopetegui has not lost any of his first 20 games for (W14 D6), the second best unbeaten start of any manager, being currently the side on the longest unbeaten run heading into the World Cup. Real Madrid June 12, 2018

20 – Lopetegui has been in charge of Spain for 20 matches and has not lost any of them.

25 – Only Luis Aragones has enjoyed a better start as Spain coach, going unbeaten in his first 25 outings.

61 – Spain have scored 61 times with Lopetegui as coach, and no team has managed to keep a clean sheet against them.

13 – No player has won more games for Spain during Lopetegui's tenure than Sergio Ramos, who has enjoyed 13 victories.

11 – Isco has been the second most productive Spain player since Lopetegui's appointment, scoring nine times and setting up two. David Silva leads the way (17 – 11 goals and six assists).

0 – But he failed to win a single trophy with the Portuguese giants.

7 – Seven of Madrid's current squad have been called up for Spain duty by Lopetegui – Jesus Vallejo being the only one to yet make an appearance.

28 – Madrid midfielder Casemiro played 28 leagues games under Lopetegui at Porto during a loan spell in the 2014-15 season. He received 13 yellow cards, more than any other player in the Primeira Liga.

13 - No player saw more yellow cards than Casemiro in the Primeira Portuguesa 2014/2015 (13) with Julen Lopetegui as 's manager, the record for the Brasilian in a single league season on the Top Flight. Cornerstone June 12, 2018