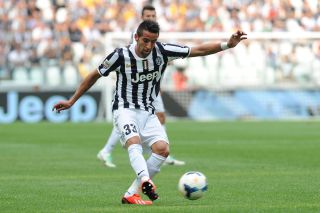 The 25-year-old joined the Serie A champions from Udinese in 2012, but saw his opportunities limited as he struggled for form following knee surgery.

Having started Juve's last two league fixtures, home wins over Genoa and Catania, Isla has stated his desire to make a positive impact.

"I had a nasty injury and everyone here at Juventus has been very patient in waiting for me," he said.

"I have always given my all, but I need to continue working hard to repay people for the faith they have shown.

"(Antonio) Conte (the Juventus manager) decided that I would stay at this club and I'm happy to be here, but I need to show that on the field of play."

Juventus and Napoli currently sit two points behind leaders Roma, who have yet to drop a point this season and have a game in hand on their rivals.

"The championship will be very difficult," Isla added. "Roma and Napoli are playing really well, but Fiorentina and Inter are in the battle as well.

"We just need to continue on the road we are on."