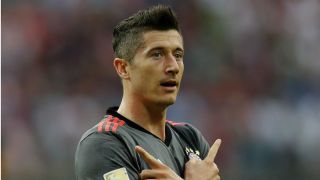 Bayern Munich star Robert Lewandowski believes the Bundesliga giants will invest heavily in their squad in the off-season, but says he is none the wiser as to who the club will be targeting.

Carlo Ancelotti's side tied up their fifth successive Bundesliga title in April, though that will represent the only trophy of the Italian coach's debut season in Bavaria.

Die Roten have already secured the services of Hoffenheim duo Niklas Sule and Sebastian Rudy for next term, but Lewandowski - who has netted 43 goals across all competitions this season - is confident Bayern, who have the difficult task of replacing the retiring Philipp Lahm and Xabi Alonso, will be busy in the transfer market once again.

"It is not my job to buy new players," Lewandowski said at an event at the Paulaner Brewery in Munich.

"But it is clear that Bayern needs new players and the question is who is coming? I don't know.

"I have no favourite player to come. Of course we need new players on two, three positions probably, but that is not my job.

"We will see who comes. That is the question. Bayern has to work now a bit."

Bayern round off their 2016-17 campaign by taking on Europa League hopefuls Freiburg at the Allianz Arena on Saturday.