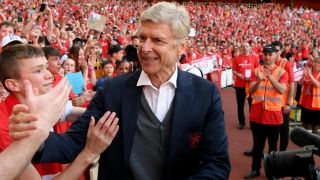 There will be a new face on the sidelines next season for the first time since 1996, with Wenger's 22-year tenure set to end against Huddersfield Town on Sunday.

But fellow Frenchman Puel – who played under Wenger at Monaco – believes it will take years for Arsenal to recover from the 68-year-old's departure.

"He is a great loss for Arsenal," Puel said of Arsenal's visit on Wednesday.

"After a few years they can come back at a good level. But it is difficult when a club have had success like this and must replace the manager and sometimes replace valuable or great players.

"I hope the fans and club do not regret their choice, because he has had a massive impact as manager of Arsenal for 22 years.

"How can you replace him? It is always tough — like after Sir Alex Ferguson at Manchester United [whose second place this season is their best since Fergie retired five years ago]."