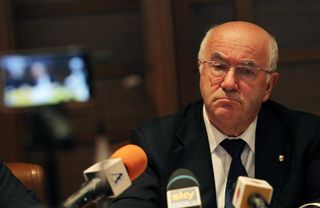 The 71-year-old was named FIGC president in August, despite coming under fire for his apparent use of racially-charged remarks during his campaign.

The comments are reported to centre around limits relating to non-European Union players playing in Serie A.

Tavecchio later apologised, with the FIGC opting not to take any action against him.

However, UEFA opened an investigation into his actions and have ruled he will not be allowed to take up any position as an official with European football's governing body for a period of six months, starting immediately.

Tavecchio will also not be able to participate in the UEFA Congress, which takes place in March, while he has been tasked with holding a special anti-racism event.

"Mr Tavecchio will organise a special event in Italy aimed at increasing awareness and compliance with the principles of UEFA’s Resolution entitled European Football united against racism," read a UEFA statement.