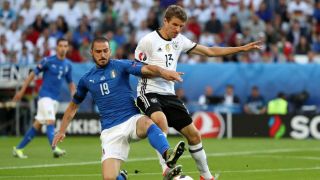 Leonardo Bonucci says Italy are going out of Euro 2016 with their heads held high after suffering a dramatic penalty shootout defeat to world champions Germany.

Italy lost 6-5 on penalties following a 1-1 draw after extra time in Bordeaux, with Bonucci one of four Azzurri players to miss in an unbelievable shootout, having earlier scored from the spot in the second half to cancel out Mesut Ozil's opener.

The defender, who was emotional after the match, feels there is no shame in defeat for Antonio Conte's side and believes they have proven able to hold their own against any European opposition.

"Penalties are a lottery and they made one fewer mistake than us," Bonucci said to Rai.

"Manuel Neuer did well to read me but I could have done better. We had said at the start of this adventure that if we went out, we had to do it with heads held high.

"Over 120 minutes I think we went toe-to-toe with the World Cup winners. We are leaving with our heads held high and I'm proud to have been part of this group.

"Going out always hurts, but these men, from the coach and president to every player, were great men. We put our heart on to the pitch in every game and every training session.

"In these competitions you have to be a group and we knew it was the only way to have our say. We beat Belgium, Spain and Sweden, then drew with the world champions.

"We will take the good from this tournament into the next two years. We have played as equals against everybody.

"We all feel down, we are disappointed but also proud of how close we are to the Italian people. They have us so much enthusiasm and we hope to have made them proud.

"Conte was sad about the defeat, but thanked the men he worked with."

Germany - who have now made it to the last four of six consecutive major tournaments - will go on to face France or Iceland in Thursday's semi-final.