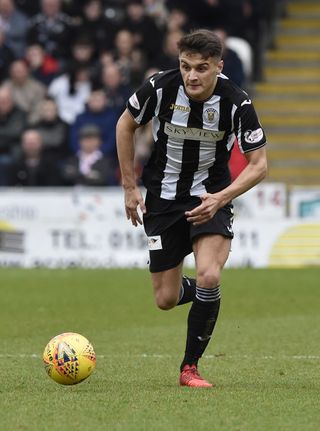 Kyle Magennis can see big potential for St Mirren under boss Oran Kearney – but admits staying in the Ladbrokes Premiership will be vital if they are to realise it.

The Buddies face a two-legged play-off with Dundee United this week after finishing second bottom of the top-flight table.

Kearney was brought in to pick up the pieces following the disastrous appointment of Alan Stubbs last summer.

The Northern Irishman took over in September when they had just three points on the board.

But, after performing vital surgery to his squad during the January transfer window, the picture gradually improved.

However, Saints’ season-ending run of six games undefeated was not enough to spare them dropping into the Premiership play-off final and they must now fight for their lives against Robbie Neilson’s Tangerines, starting with Thursday’s opening leg at Tannadice.

But midfield playmaker Magennis has seen enough from his new boss to convince him the Paisley side can have loftier ambitions next term, so long as they can battle their way to safety this week.

The 20-year-old said: “It’s massive we stay in this division.

“We’ve got a good group of boys and if we can stay up then look to start next season with the same squad I think we could look to do much better than what we did this season.

“Obviously it was a bit of a shock to the boys at the beginning of the season with Jack Ross leaving and then Alan Stubbs coming in.

“He brought in a good few players but it just didn’t seem to work out.

“Since then Oran has come in and things have been brilliant since then, so I think it would be good next season to have him in charge from the beginning.

“We just have to do our job this week and make sure we’re playing Premiership football and not dropping back down again.”

Saints did their bit by beating Dundee at Dens Park on Saturday but did not get the favour they were hoping for from St Johnstone as Hamilton got the result they needed against Tommy Wright’s team to stay up.

But, while missing out on automatic safety was a blow, Magennis insists his side are on a roll as they prepare to return to Tayside after building up some vital momentum in the final weeks of the campaign.

He said: “The boys were a bit deflated on Saturday because we missed the chance to escape the play-offs.

“But it was through no fault of anybody else. It comes down to us. We didn’t perform well enough over the season.

“However, we’ve shown over the past six games we’re a much better side now that at the start of the campaign and hopefully that shines through again.

“We’re even a far better side from February when we lost to United in the Scottish Cup.

“All the boys have grouped together and that spirit has really driven us through the last few weeks of the season.

“Hopefully that unity we have will be enough to get us out of trouble this week.”