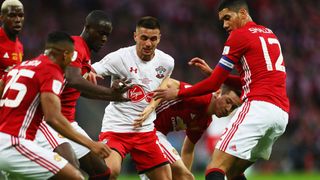 The loss was harsh on Southampton, who rallied from 2-0 down to level proceedings thanks to Manolo Gabbiadini's double and outplayed United for much of the match.

Gabbiadini also had a goal wrongly ruled out for offside in the first half, while Southampton hit the post after the break to further frustrate Serbia international Tadic.

"It's very painful," Tadic said. "We deserved much more. I think everyone has that feeling. It was a very nice atmosphere.

"We were very happy when we saw our fans. They supported us really well. It's very difficult to find some words, but I think we deserved much more.

"In the first half we played much better than them and they saw that they had problems with us, so in the second half they put [Michael] Carrick to have more balance.

"Still I think we were the better team, but perhaps they were more experienced than we were."

Southampton team-mate Oriol Romeu could not hide his disappointment either, adding: "It's a hard feeling.

"Looking at how the game has gone I think we had a tough moment when we were 2-0 down but as a team we did amazing to come back and still playing with our philosophy and with our style of football, playing between the lines and creating chances.

"That's what we wanted to do and playing in that way we also had a couple of opportunities to get a third goal. It didn't come then we didn't score and suddenly they did and in the final few minutes they were clinical."