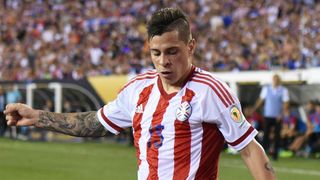 Juan Iturbe wants to prove himself at Roma after returning to the club following an uninspiring loan spell with AFC Bournemouth.

The 23-year-old attacker has seen his career nosedive since signing for the club from Verona in a €22million deal in July 2014.

After 18 months with Roma, Iturbe was loaned to Bournemouth last January, but the Premier League club did not take up their option to buy him after he failed to make a single start in the English top flight.

Iturbe - who represented Paraguay at the Copa America last month - is now hoping to prove himself to Roma head coach Luciano Spalletti and revive his club career.

"Sometimes it is nice to go away and come back with your head straight," he told reporters. "I had a good experience in England, but I'm back to stay and I want to get to know my new team-mates.

"I have not spoken to Spalletti yet. Let's see when we can talk and get everything fixed.

"I really want to get to know him, when I was away I followed things and he has proven himself to be a great coach.

"He took over a Roma side which was not playing well and proved his worth."