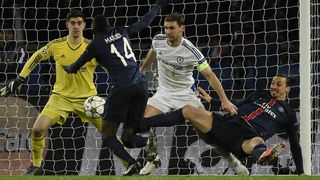 Branislav Ivanovic was impressed by Chelsea's courageous display in a 2-1 defeat to Paris Saint-Germain in the first leg of their Champions League last-16 encounter on Tuesday.

Zlatan Ibrahimovic put PSG ahead with a deflected free-kick at the Parc des Princes but John Obi Mikel equalised in first-half stoppage time.

However, substitute Edinson Cavani scored a winner for Laurent Blanc's side 12 minutes time, beating Thibaut Courtois, who made a string of impressive saves earlier in the second half.

Nevertheless, Ivanovic - who played at centre-back as captain John Terry missed out with a hamstring injury - felt the Premier League champions proved their mettle and will fight to book a place in the quarter-finals in the return leg on March 9.

"It was a very difficult game, we tried to play our game and to score the away goal but in the end they scored a massive goal," Ivanovic told BT Sport.

"It was very difficult moment for our team because of a lot of things, but we came here with courage and we tried to score the goal.

"We had a couple of chances before they scored the second goal. We could have won the game and scored a second one.

"We lost a bit of concentration in the end and we were a little bit open, and the strikers like Paris have use every single chance.

"We have to be more careful with this kind of thing because these small details can decide a game.

"We kept fighting, it was difficult and we will try to do everything to win at home to go through."

Gary Cahill was pleased Chelsea had managed to secure an away goal, but was frustrated they could not hold on for a draw.

"Obviously we pushed for the goal tonight. We managed to get it but we're disappointed at the end, 1-1 here would've been a terrific result," he added.

"They're a fantastic team and that was very, very tough. We know how tough it is to come here, you see their record this season – not just in the league but in European competition, it's very tough here.

"It's tough when they have so many corners and final third entries. It's poised now, we know what we have to do."