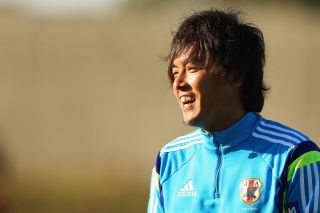 Long-time leaders Urawa Reds have taken just five points from a possible 15, while Gamba have won eight of their last nine league games to move to within three points of the summit - with a superior goal difference.

The Reds are not in action until Monday, when they tackle mid-table Yokohama F. Marinos, and their next game is against Gamba, with only two rounds to come after that crunch clash.

Yasuhito Endo, in his 14th season with Gamba, has been central to their excellent form, and the midfielder has urged his side to pass what is, on paper, a straightforward assignment before focusing on the showdown with the Reds.

"The game against Urawa is looming, but we've got to forget about that and give it our all against Sendai," Endo stressed.

"We've been on a roll and cut a big gap, and that gives us confidence, but we've achieved nothing yet. We must win to keep up the pressure."

Urawa suffered a blow in midweek when leading marksman Shinzo Koroki – an ever-present for them this season – was ruled out of the Yokohama game due to a fractured fibula.

Tadanari Lee is expected to replace Koroki, with the former Southampton man having scored the only goal in the sides' first meeting this season, and he also came off the bench to grab Urawa a point at Kashima Antlers last time out.

It has been seven and a half years since the rivals drew in the J-League, with Yokohama recording nine victories to Urawa's five since that stalemate.

Kashima Antlers, Kawasaki Frontale, Sagan Tosu and Kashiwa Reysol are the only realistic contenders for the third and final AFC Champions League place.

Kashiwa are overwhelmingly expected to make it four successive wins at home to the already relegated Tokushima Vortis, while the other three try to rebound from defeats. Kashima are at mid-table Albirex Niigata, while Sagan host another team with little to play for in Vissel Kobe.

Kawasaki, by contrast, are at home to a Shimizu S-Pulse side in desperate need of points. Shimizu are, along with Vegalta, Ventforet Kofu, Omiya Ardija and Cerezo Osaka, scrapping to avoid the remaining two relegation places.

Omiya are away to eight-placed Sanfrecce Hiroshima, while Cerezo and Ventforet collide.

Cerezo have taken four points from their last two matches, but Ventforet have triumphed on their past three J-League visits to Yanmar Stadium Nagai.

Finally, Nagoya Grampus entertain a Tokyo side who have lost three of their last four matches to slide to seventh.