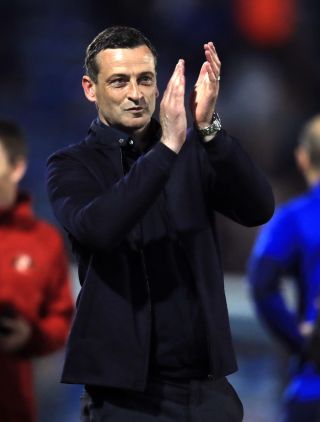 Sunderland manager Jack Ross believes his side have answered some of their critics by reaching the Sky Bet League One play-off final with victory over Portsmouth.

The Black Cats dropped out of contention for automatic promotion after registering just one win from their final seven games.

But they remain on course for an immediate return to the Championship after a dogged goalless draw at Fratton Park secured a 1-0 aggregate success and a trip to Wembley.

“I think you can see from our reaction, we’re pleased, we’re satisfied, it’s a difficult place to come and get a result but we know we’ve still got one big game ahead of us,” said Ross.

“It’s a happy dressing room in there, the players are pleased with what they’ve done but they’re also recognising that there’s a week of preparation ahead of them and a huge game to follow that.

“It will be a good journey home for us, it’s a long way back to the north east from here.

“We’ve answered a little bit of criticism by getting through to the final.

“It’s a difficult environment to come into, the pitch is tight and the fans create an incredible atmosphere. And I think we did it pretty well.”

Sunderland travelled to the south coast with a 1-0 lead thanks to Chris Maguire’s thumping volley in Saturday’s first leg at the Stadium of Light.

The Black Cats will be back at Wembley on May 26 to face either Charlton or Doncaster, less than two months after they lost the Checkatrade Trophy final there to Pompey on a penalty shoot-out.

Ross added: “We have another opportunity to go and, more importantly, set out to achieve what we set out to do at the start of the season, which was returning to the Championship the first time.

“The fact it’s at Wembley is just an addition to it. We’ve been there recently, which takes that sense of occasion away from it a little bit and just becomes a really, really important game for us.”

Portsmouth manager Kenny Jackett suggested his players ran out of steam this term and vowed to try and challenge for promotion again next season.

“Ultimately over 180 minutes, it’s a strike from Maguire – and a quality strike – that’s decided the game,” said Jackett.

“We couldn’t find that one moment that would have prolonged the tie.

“They were dogged, resolute and for us going forward just couldn’t find the correct pass or get up in and around their box.

“(We will) build in the summer, make sure that we look at the season honestly and fairly and then do everything we can to build a side that can be competitive again in League One next year.

“I think we probably limped over the line (at the end of the season) a little bit.”