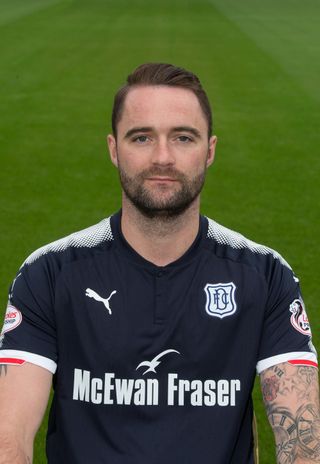 James McPake is determined to restore pride at Dundee after being installed as the manager of the relegated club.

The 34-year-old former Dundee captain has been handed a rolling contract, with Jimmy Nicholl arriving as his assistant after leaving a coaching role at St Mirren.

Former club captain McPake took over on a caretaker basis for the final game of the season after Jim McIntyre was sacked.

The former Livingston, Coventry and Hibernian defender was the club’s under-18s coach and also took charge of the reserve side last season.

He was forced to quit playing prematurely after suffering a serious knee injury during a Dundee derby on January 2 2016 – and his five-year spell on Tayside – and he has previously spoken of his desire to repay the club’s faith.

He said: “I always wanted to be a manager but to do it here is probably a bit more special for me because of my history with the club, how the fans have been with me and what we went through together.

“I probably have a relationship with everyone in the building, I know how good the staff are behind the scenes, I know what this club means to them.

The 62-year-old former Raith Rovers, Millwall and Cowdenbeath manager has previously coached with the likes of Dunfermline, Aberdeen, Kilmarnock, Hibernian, Falkirk and Rangers.

“He is someone I know very well from working with him with Hibs and Northern Ireland,” McPake said.

“He was the only person for me and if I couldn’t have got Jimmy I don’t think I would have been in the position to take the job. And I mean that, I was never going to go out and look for any experience. I know the way Jimmy works and I wanted him to come on with me.”

Nelms added on Dee TV: “If we were going to go with a young manager we had to make sure he had a support team around him that will allow him to be successful and we think we’ve got that this time.”

Nelms added: “James has been at the club for five years now. People don’t realise but he was actually a first-team coach when he was injured, all the way back when Paul (Hartley) was here.

“He’s been our under-18s and reserve team manager and we really liked the way he works.

“He’s a young manager and we know for a fact he’s going to give us everything for Dundee Football Club. That’s what we really want.

“Jimmy Nicholl as his number two is going to give him all the support that he needs.”