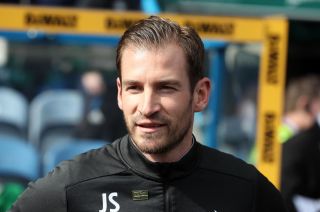 Jan Siewert insists he is on the same page as prospective new Huddersfield owner Phil Hodgkinson as they prepare for next season in the Sky Bet Championship.

Huddersfield’s clash with Southampton on Sunday will be the last match under current chairman and owner Dean Hoyle who has been in the role since 2009.

The Terriers boss believes the new owner, who is also a Huddersfield fan, will move the club forward.

“I like emotions, it’s good that I can really feel his (Hodgkinson’s) passion,” Siewert said.

“As I said from the beginning, the first thing that I really like is that there are passionate people working here.

“It’s important that we both know that we have the same principles in what we want to achieve as a club.”

The 36-year-old German added he has a long-term plan for the club and has called for patience ahead of the summer transfer window.

“We know our current situation and we have to learn from everything, but I think it’s important that he said the things he wants to do.

“Looking forward and knowing that it all can’t be done in just one transfer window.”

Huddersfield ended their eight-match losing streak last weekend with a 1-1 draw against Manchester United, while Southampton have not won in their last four matches.

Southampton secured their place in next season’s Premier League on April 27 with a 3-3 draw against Cardiff and will be looking to end their season on a high at St Mary’s.

However, Siewert wants his side to build on the performance against Ole Gunnar Solskjaer’s men as they prepare for their final league game.

“We know it will be a tough game but they are also a tough team.

“We can once more show our fighting spirit and hopefully end the season with a win.”

Looking forward to next season in the Championship, the boss laid out what he wanted from the players.

“No matter what the result is, for me it’s always important that the players show each game the fight.

Siewert will be without Erik Durm for the last game of the season, while Mathias Jorgensen and Chris Lowe will be assessed ahead of the tie.

Joel Coleman will start for the Terriers, with Siewert saying he wanted to have a look at the 23-year-old goalkeeper.