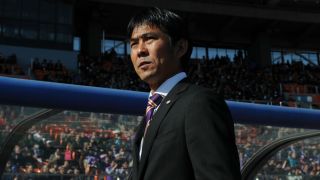 Japan head coach Hajime Moriyasu is hoping to find ways to support the Hokkaido community after the island was struck by a powerful earthquake on Thursday.

Thirty-five people have been confirmed dead since a 6.7-magnitude quake triggered landslides and widespread power outages.

The disaster prompted the Japanese Football Association to cancel the national team's friendly against Chile in Sapporo, Hokkaido's capital city.

Moriyasu will instead take charge for the first time against Costa Rica in Osaka on Tuesday, although the 50-year-old says his thoughts remain with the people affected.

"It's sad that the game was cancelled, but with this earthquake it's not right to think about playing football because it's a matter of people's lives," Moriyasu said.

"We would like to think about the feelings of people in Hokkaido, to reach out and support them."

Experienced defender Tomoaki Makino echoed his coach's sentiments, saying: "We have to think of what we can do.

"With people in Hokkaido and people in the Kansai area devastated by the typhoon, a lot of people in Japan are now suffering and saddened.

"First we have to understand the situation we are under and try to share the hope with people in Hokkaido so that they can get their ordinary life back as soon as possible."