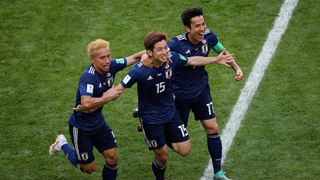 World Cup workers at the Ekaterinburg Arena may be able to put their feet up on Sunday as Japan and Senegal roll into town for their Group H meeting.

Both sides come into the clash high on confidence following 2-1 victories over Colombia and Poland respectively, meaning another success will all-but guarantee a spot in the second round.

And it was not just on the field that the two nations earned praise following their opening wins, as their supporters took the time to clean up the rubbish around them after the games in Saransk and Moscow, making life easier for the volunteers in those stadiums.

M'Baye Niang scored what proved to be a decisive second for Senegal against Poland in sneaky fashion, returning to the field following an injury just in time to capitalise on a mix-up between Grzegorz Krychowiak and Wojciech Szczesny to round the keeper and score.

After netting his first international goal, the forward was quick to turn his attention to a meeting with the Blue Samurai as Senegal look to reach the last 16 in only their second appearance at the finals.

"It's a good team. We are preparing and we will have time to study this team from Japan, which has qualities."

Japan were aided by a third-minute red card for Colombia's Carlos Sanchez in their opening fixture, and defender Yuto Nagatomo believes he and his team-mates must be wary of Senegal's threat on the counter.

"Their speed and physicality is something I expected, but what stood out was their discipline," he said. "They moved as a connected unit, with every piece interlocking.

"There is an impression sometimes that African teams, while having great individual talent, have a weakness when it comes to organisation, but there is little sign of that [with Senegal]. Everyone has a high awareness of defence and they are outstanding on the counter-attack."

It was his goalbound effort that was handled by Sanchez for the second-fastest dismissal in World Cup history, and the Borussia Dortmund midfielder inflicted further punishment on Colombia by slotting the resulting penalty. Japan will look to him to be their creative force once more.

Sadio Mane is the stand-out talent within this Senegal side, but Everton midfielder Gueye provides the protective shield from which a foundation can be built. He will have to be careful, though, as a yellow card against Poland means another on Sunday will rule him out of a potentially crucial final meeting with Colombia.

- No Asian nation has ever won both of their opening two games at a World Cup tournament.

- Japan have not won consecutive games at the World Cup since 2002, when they co-hosted the tournament with South Korea. On that occasion it was in their second and third game of the group stage (versus Russia and Tunisia).

- Senegal have conceded just five goals in their last nine matches in all competitions, with four of them coming in the second half of games.

- Only two African nations have ever won both of their opening two matches to a World Cup tournament – Cameroon in 1990 and Nigeria in 1998.