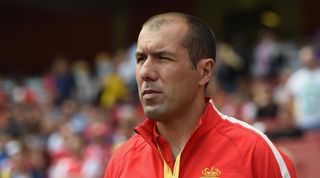 The Portuguese inherited a squad that had just finished second in Ligue 1 behind Paris Saint-Germain, inspired by the likes of Radamel Falcao and James Rodriguez,

However, the infuential Colombia internationals duo left the club during the close-season along with along with Emmanuel Riviere and there was a distinct lack of quality players brought in to replace them.

As a result, Monaco have struggled under Jardim with only three wins in the league, leaving them 11 points behind leaders Marseille after nine games.

Jardim stated that Monaco's aspirations have changed because of those key departures and rather than targeting the title, he would be happy with a place in the top five.

"When I signed, the project was strong, to win with players like Falcao or James," the coach told L'Equipe. "Then Vadim Vasykliev [Monaco's owner] said that things would change.

"But I am the coach of Monaco, I support this new project in the same way. My job is to help the club with young people who need to grow

"It is hard to imagine that we can win the championship. The ambition is to reach the top five."

Jardim has come under pressure in the opening months of the season and he believes that would not have been the case if he was French.

"When a team does not win, people point the finger at the coach, that happens everywhere," he added. "And when the coach is Portuguese and is little known it is even easier.

"First, we look at our country, it is normal. The impression I have is that in France, people are nationalists. Defend compatriots but foreigners less [so]."