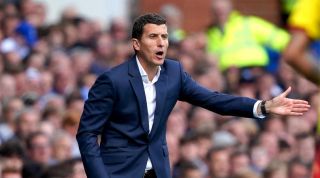 Watford are considering Javi Gracia’s future after the Hornets suffered their third consecutive defeat of the 2019/20 campaign, write the Daily Mail.

West Ham ran out 3-1 winners at Vicarage Road on Saturday, leaving Watford rooted to the foot of the Premier League table.

Gracia’s side have now lost their last seven matches in all competitions stretching back to last season.

And the Watford board will not hesitate to act if they believe the Spaniard is no longer the man to turn the situation around.

Gracia signed a new four-and-a-half year contract last November and led the Hertfordshire outfit to the FA Cup final in 2018/19.

However, the former Malaga boss is now under huge pressure to secure a positive result against Newcastle next weekend.