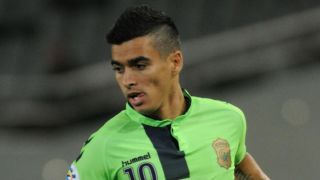 Leonardo struck twice as Jeonbuk Motors put one foot in the AFC Champions League final with a 4-1 first-leg victory over Seoul in the last four.

Jeonbuk dominated from the first whistle and were gifted an opener in the 22nd minute when the referee awarded them a soft-looking penalty after Kim Shin-wook went down under pressure from Kwak Tae-hwi and Ko Yo-han.

Leonardo sent goalkeeper Yoo Sang-hoon the wrong way from the spot, and Ricardo Lopes soon doubled the advantage by slotting between Yoo's legs to cap off a well-worked move.

The tie threatened to become humiliating for Seoul when Leonardo's close-range header made it 3-0 five minutes from half-time.

Ju Se-jong pulled one back as he caught Jeonbuk napping in the opening seconds of the second half, seemingly offering the visitors some hope ahead of the return leg.

However, Kim's all-too-easy 84th-minute effort ensures Jeonbuk head to the capital with a three-goal cushion.

The second leg takes place on October 19, the day after El Jaish host Al-Ain in the other semi-final - a tie the Emirati outfit lead 3-1.