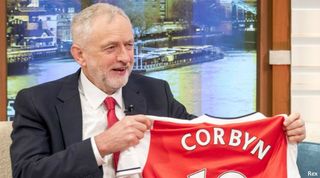 Corbyn, widely known as an avid Gunners supporter, believes Arsene Wenger is the right man to lead the north Londoners despite the pressure he is currently under.

The Labour party leader was speaking to Copa90 at Hackney Marshes the morning before the FA Cup final (which he attended), and had a personal tale to tell about the 67-year-old manager who has reportedly agreed a two-year deal to stay at the Emirates Stadium.

He said: "Wenger came to the club in 1996 and he wasn't particularly well known.

"Arsenal recruited him the year before and said 'will you come manage Arsenal?'. Do you know what he said? He said, 'Yes, but I must finish my contract with Grampus Eight first'.

"A few months later, me and my boys had been playing football in the park and were driving home. Arsene Wenger is walking to the stadium carrying a box.

"They [Corbyn's sons] said 'Look, it's Arsene Wenger!' We stopped, he put the box down and chatted to them about football. This is a man that is human.

"You've got to add up his achievements - the league wins, the cup wins, until this season 20 years in the Champions League.

"He's a guy who's brought the club forward to a world status and we should recognise that."

Will Wenger return the favour and give Corbyn his backing for the general election on June 8? Only time will tell.