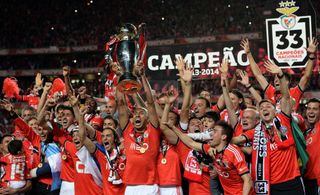 A double from Lima secured a 2-0 victory over Olhanense at the Estadio da Luz that ensured Benfica cannot be caught with two games remaining.

With excitement building prior to kick-off in Lisbon, Benfica fans had to wait until just before the hour to officially start the celebrations, when Lima netted twice in three minutes.

Nearest rivals Sporting Lisbon are seven points adrift and Jesus was quick to praise a team effort in securing a first Primeira Liga title since 2010.

"I think it will be an unforgettable night for us," the head coach told Benfica's official website. "This was our major goal and we are all to be congratulated.

"I was confident because I know the value of people working with me. We work with the best and when this happens it is easier to meet the objectives.

"It is the culmination of work by many people who always believed that was possible.

"The president has changed Benfica, not only sportingly, Benfica are now a club with a very strong structure."

With league success wrapped up, Benfica, who are still in both domestic cup competitions, can now focus on claiming a quadruple, starting with their UEFA Europa League semi-final first leg with Juventus on Thursday.