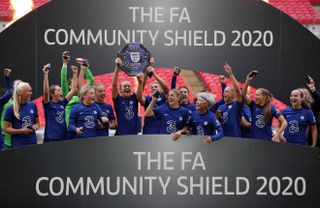 Kicking off the first ever Community Shield double-header at Wembley, the first domestic women’s match in six months was an entertaining affair in the capital.

Both sides had chances and Sam Kerr will be relieved her glut of missed chances did not cost Chelsea, with Bright’s stunner and Erin Cuthbert’s emphatic stoppage-time strike sealing a 2-0 win for Emma Hayes’ side against City.

These familiar foes played at an impressive tempo given the long break, but the rustiness was epitomised by the sheer number of poor finishes by Australia star Kerr.

City summer signing Chloe Kelly hit a post in Gareth Taylor’s first match at the helm, but an even first half was followed by a second period dominated by Chelsea.

Scott’s sending-off for a second booking was a key moment, with Bright soon scoring a superb 30-yard effort to set the Blues on course for a win wrapped up at the death by substitute Cuthbert.

Chelsea started on the front foot at an empty Wembley but Kerr’s uncharacteristic strike into the side-netting within three minutes started what would prove to be a difficult afternoon for her.

City gradually got a foothold on proceedings and Georgia Stanway forced a good save from Ann-Katrin Berger from distance after hard work by Lauren Hemp.

The 20-year-old soon pulled up injured and was replaced by Janine Beckie, who found the net minutes after her introduction – only to be rightly ruled offside following Kelly’s superb work.

Kelly was looking bright and soon hit a post after Berger pushed away Stanway’s initial effort, while Kerr continued to waste chances she would normally put away.

City needed some last-ditch defending to keep the Blues at bay before the break, with Hayes’ side starting the second half as they ended the first.

That also meant Kerr continued to be profligate, with her failure to find the target when found from close range by Fran Kirby arguably her worst miss.

The Australia international could not be blamed for her next failed attempt but, after Stanway directed across the face of goal at the other end, she then lashed wildly wide.

Kerr may well have been hoping Rebecca Welch had not allowed play to continue for that 61st-minute chance and the referee went back to show Scott a second yellow card for a challenge on Ji So-yun in the build-up.

Chelsea did not need long to take advantage, but it was a centre-back rather than striker that did the damage.

Bright collected the ball 30 yards from goal and unleashed a thundering strike that left Ellie Roebuck helpless in the City net.

City brought on United States international Sam Mewis after that 66th-minute strike, which Ji tried to add to as the Blues looked to strengthen their grip.

Chelsea cruised through the remainder of the match and got the second their play deserved when substitute Cuthbert’s struck in stoppage time.