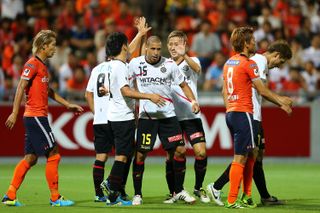 Yasuhiro Higuchi's side top the table by three points having lost just once in their last eight league matches.

They visit the NACK5 Stadium Omiya to face Ardjja who are on an eight-game losing streak in the J.League.

That poor run of form has seen Tsutomu Ogura's charges slip to sixth, and they will be desperate to arrest that alarming slide in front of their home supporters.

Urawa Reds will look to bounce back from their disappointing defeat, when they welcome Albirex Niigata to the Saitama Stadium 2002.

Had they beaten Marinos they could have gone top of the league, but they now sit four points adrift of the leaders.

Second-placed Sanfrecce Hiroshima are looking for their first maximum haul in four games when they go head-to-head with Tokyo at the EDION Stadium.

Sanfrecce were leapfrogged at the top of the table after a 2-0 loss away to relegation-threatened Venforet Kofu on Wednesday.

Their hopes could hinge on striker Hisato Sato, who has 14 goals to his name in the league so far this season.

At the bottom end of the table Oita Trinita are in desperate need of a win.

They trail 15th-placed Ventforet Kofu by 14 points, and they host Shimizu S-Pulse at the Oita Bank Dome looking for their first win in 12 matches.

Jubilo Iwata and Shonan Bellmare are also in the relegation zone, and they have home fixtures against Ventforet Kofu and Vegalta Sendai respectively.