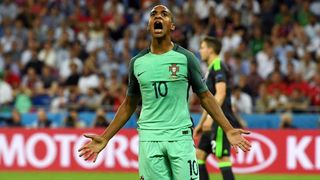 Joao Mario struggled to believe Portugal were on their way to the Euro 2016 final after a 2-0 win over Wales in Lyon, but coach Fernando Santos always had faith in their stuttering campaign.

Two goals in the space of three minutes from Cristiano Ronaldo and Nani turned a tense encounter decisively in Portugal's favour and earned them a first win inside 90 minutes on what has been a rocky road to the Stade de France.

Portugal's style of play came in for criticism after three consecutive draws saw them scrape into third place in Group F, but Sporting CP midfielder Joao Mario was involved in much of their brighter work during a triumph at the Stade de Lyon that was easier on the eye.

Asked when he realised a spot in the final to face hosts France or world champions Germany was possible, he said: "It was when the referee blew the whistle. It is a reality, not a dream anymore. We believed in the things we do, and we are on the final with merits.

"[Santos] has said since the first day that we would be in the final. He was the first person who believed and sent this message.

"We didn't win any games in the first stage. It was a warning. We didn't want to qualify in third place. Maybe we had a little bit of luck. But now we are waiting for a strong team and we will be prepared."

Regarding which of two formidable potential opponents will face off against Portugal, the 23-year-old has no preference.

"Our dream was to be in the final, whatever the opponent," he added. "We don't choose rivals. We did our job and now we will see which team we will play against.

"I am living a dream. Our group has always believed, we promised to be there. Now it is time to try to win it.

"Portugal has never won a title, and we hope to make history."