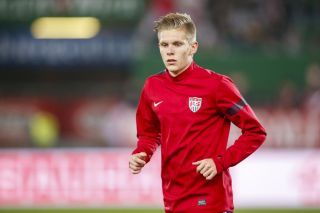 Johannsson was top scorer at AFAS Stadion last season with 25 goals in all competitions as AZ finished eighth in the Eredivisie.

With only Heerenveen's Alfred Finnbogason and Graziano Pelle of PSV scoring more than the 23-year-old in the Dutch top flight this term, Johannsson's club were keen to extend his deal.

Director of football Earnest Stewart hailed the development of Johannsson since his arrival in January 2013, and hopes to see him maintain that form over the coming years.

"We are very pleased that we have established a mainstay in our team for one more year", he told the club's official website. "Aron has quickly grown to the focal point of AZ.

"With this new contract, we want to reward him for his good performance.

"It's amazing that he became top scorer in his first full season. Hopefully Aron continues to deliver."

Johannsson was named in Jurgen Klinsmann's squad for the FIFA World Cup finals and could lead the line in their opening match against Ghana on June 16.