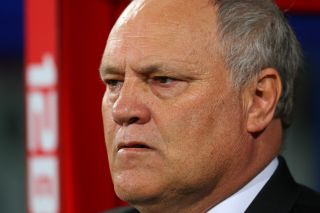 Kasami hit a wonderful right-footed effort to draw Fulham level after Adrian Mariappa had given the home side the lead at Selhurst Park.

Steve Sidwell then struck a brilliant volley of his own to put Fulham ahead at the break, before Dimitar Berbatov and Philippe Senderos rounded off a convincing win in the second half.

Jol said he feels Kasami's goal could be one of the best in the Premier League this season, while also claiming it was better than his countryman Marco van Basten's famous strike for the Netherlands in the final of the 1988 European Championships.

"(The goal is) probably better than people think because he had to control it with his chest and, with his wrong foot, he hit it in the far corner. It was a good goal from a talented boy," Jol told Sky Sports.

Asked about comparisons with Van Basten's goal, he quipped: "It was totally different, you can't compare the two. This was better.

"To score a goal like that, it could be one of the goals of the season."

Jol also explained the gamble he took in playing Berbatov alongside Darren Bent in his forward line, with the Bulgarian opening his Premier League account for the season against Palace.

"Everything seemed to go for us because the first two goals went our way. I think we took a few risks before the game, believe me," he continued.

"I had to play Berbatov and Bent at the same time. People knew before it would be difficult to play them together but good players can play together.

"We had to work on that and we didn't have much time. Berbatov was almost victimised but he wants to play up front. We did it before against Cardiff and lost so it was a risk but I knew in my heart it would work."

The win ensures Fulham record back-to-back victories for the first time this season, but Jol dismissed any idea that he had been feeling the heat.

"I love (the pressure) because the boys want to do well for me and the club," he added.

"I feel we have the players to do well and we are in a better position now.

"We needed the three points and now we're in a better position for Fulham."