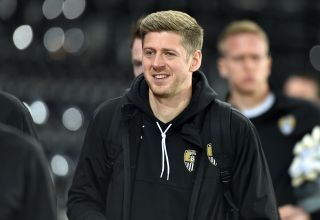 Jon Stead admits “it’s a strange one” but is relishing the prospect of Sunday’s Vanarama National League play-off final between his current side Harrogate and old club Notts County.

Ahead of the North Yorkshire outfit’s bid on Sunday to secure a first-ever promotion to the Football League at Notts County’s expense, Stead told the PA news agency: “It’s a strange one.

“Football throws up these little scenarios. Me playing against an old club is not something that unusual, I’ve been at that many! But Notts County, I spent four years down there, it was my last club.

“I had some good times there and some bad times as well, but I still thoroughly enjoyed it. So it’s a strange scenario.

“It’s a fantastic occasion for us, something we’ve worked extremely hard for, and it’s an opportunity we need to grasp.”

He added: “Although I have the history with Notts County, that doesn’t change how I approach games. Come Sunday, I’m playing for the badge on my shirt and the name on the back.

“I want my club to be successful and that means winning against any club that comes in front of us. It wouldn’t be any different whatever club I was playing against.”

The contest will be Harrogate’s maiden Wembley appearance – and the same will apply to Stead should he feature.

“I thought the chance had gone to be honest,” he said. “I thought, ‘this is two chances potentially I’ve got to get to Wembley this season’.

As well as their promotion push, Harrogate prior to lockdown reached the FA Trophy semi-finals, in which they were also set to face Notts County.

He added: “Then everything gets stopped, and I’m thinking that is just my luck – at 37 I’m not going to get the opportunity because of a global pandemic rather than anything else.

“Once it was announced that we were actually going to finish with the play-offs, I was over the moon because it keeps that dream alive, and then to win the game on Saturday (the play-off semi-final against Boreham Wood), it just means the world to me.

“I have a chance to go and play on that stage, I’m going to enjoy every second of it, and hopefully the majority of the enjoyment will come if we’re celebrating at the final whistle.”

Stead has no doubt that should Simon Weaver’s men emerge triumphant on Sunday it will rank “right up there” among the highlights of his career.

The former England Under-21s player, who scored Blackburn’s winner in a 2004 Premier League game against Manchester United and netted in Bradford’s 4-2 FA Cup victory over Chelsea in 2015, said: “I think now, because I’m towards the end of my career, this almost means more.

Glad I had my pal here to see this! Love you always sin ❤️❤️ @JSFTrustpic.twitter.com/RGoeYZjzSA— Jon Stead (@JonSteadSA) July 25, 2020

“I can appreciate things a lot more. I have a better understanding of the game and what it means to other people.”

While there will be no fans at Wembley, there will be cardboard cut-outs in the stands, including two featuring images of Stead’s friend Jordan Sinnott, the midfielder who died in January aged 25 after being assaulted.

Stead, Sinnott’s former team-mate at Huddersfield, said: “They were in the stand on Saturday and it was brilliant just to almost feel his presence there.

“He’ll be there watching at Wembley, so it will be nice again to have him there.”