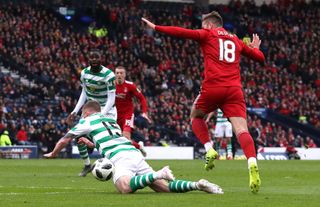 Jonny Hayes plans to cherish every minute of Celtic’s triple treble push after fearing his career at Parkhead was doomed.

The Irishman spent six long months out of action after suffering a broken leg against Dundee in December 2017.

And during the dark days of his recovery he worried he would never be able to shake off the aches and pains caused by the horror collision with Dark Blues defender Josh Meekings.

But with the support of his family, the 31-year-old former Aberdeen winger fought his way back to fitness and has been given a new lease of life under interim Hoops boss Neil Lennon.

A peripheral figure during Brendan Rodgers’ time in charge, Hayes has now become a key man for Lennon and was even given the nod to start Sunday’s William Hill Scottish Cup semi-final against Aberdeen ahead of Scott Sinclair.

Now having helped shoot down his old Pittodrie team-mates in the 3-0 Hampden triumph, he plans to soak up every minute as Celtic look to finish the campaign on a high by completing the domestic clean sweep against Hearts in the May 25 final.

“Since I had the injury I’ve decided that every moment I have on the pitch is there to be cherished,” said Hayes.

“I just love getting out there and if I can contribute in a positive way then all the better.

“It’s been all a bit stop-start since I came to the club but every time you get to play it’s an opportunity and it’s important you don’t throw it away.

“When I got injured, to be honest I did worry this move might not work out.

“I broke my leg and two or three months into the rehab I was still feeling the pain every day. I didn’t know if I was going to come back and there were times when you think you’ll never get back to being the same player.

“All that doubt goes through your head but I’ve got a good family who support me. My wife convinced me I was all right, probably just to get me out the house.

“The medical team here were phenomenal and I remember the old manager (Rodgers) coming up to me one day and saying, ‘You look like you’re back to normal now, so it will probably be two or three months until you’re fully back and sharp’.

“I was thinking I was already back! But the medical team know our bodies better than we do and they had full confidence that I’d come back.

“That has just made me all the more determined to make the most of the opportunities I get. Every game from here on in is a big game and I need to grab them with both hands.”