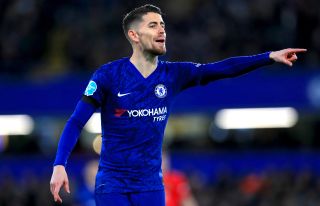 Manager Frank Lampard is likely to rotate his starting line-up from Sunday’s 2-1 win at Aston Villa to cope with fixture congestion.

Defender Fikayo Tomori is still sidelined with a muscle complaint and could be a week away from being ready to feature. Forward Callum Hudson-Odoi is back in training but not match fit so will miss out.

City are without record goalscorer Sergio Aguero, who has undergone knee surgery after suffering injury in Monday’s victory over Burnley.

Defender John Stones (ankle) could soon be back in contention and number two goalkeeper Claudio Bravo (thigh) has also been training.

Forwards Kevin De Bruyne and Raheem Sterling, who were on the bench as manager Pep Guardiola made eight changes on Monday, could return to the starting line-up.