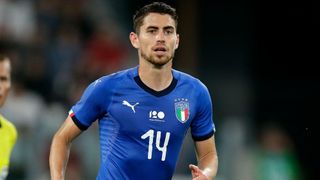 Jorginho has a five-year contract waiting for him at Manchester City if he completes a move from Napoli to join the Premier League champions, his agent has claimed.

The Italy international is widely reported to have been identified by Pep Guardiola as the ideal midfield addition for the Citizens, but a transfer has yet to be agreed with the Serie A club.

Napoli president Aurelio De Laurentiis has already said that the club have rejected a €50million offer from City for the midfielder, who has been capped eight times by Italy.

But it appears as though Jorginho is keen on making the move.

"If the agreement doesn't arrive then obviously he'll make himself available for Napoli. With the World Cup, negotiations have slowed down a bit but we hope the deal can be defined soon."