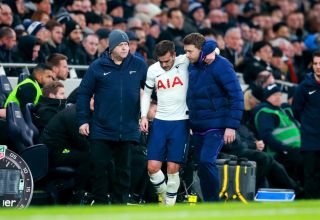 Tottenham head coach Jose Mourinho revealed Harry Winks is set to be out for “weeks not months” after picking up an ankle injury in the 2-1 win over Norwich.

The England midfielder limped off in the second half at the Tottenham Hotspur Stadium after a challenge by Todd Cantwell, who had already survived a VAR check for violent conduct.

Spurs were winning 1-0 at the time, through Dele Alli’s opener, and then needed Son Heung-min’s late header – after Teemu Pukki had drawn the Canaries level – to earn a first Premier League victory of 2020.

👔 Jose: "We have to kill opponents off when we are better than them. If not, we have the risk." #THFC ⚪️ #COYSpic.twitter.com/YFofxmPEeG— Tottenham Hotspur (@SpursOfficial) January 22, 2020

Mourinho had not dared to ask his medical staff how bad it was before he came into his post-match press conference.

But as he left the stadium he offered a positive update, saying: “It is not a crazy one – hopefully weeks and not months.”

He had earlier said in his press conference: “I prefer not to know before I come in here so I come with a normal face.

“I don’t want to come in here with a very upset face, so I’m even afraid to ask, but when I leave here I have to ask.”

While Winks is the latest injury victim, Spurs did at least welcome back another as skipper Hugo Lloris was given a surprise start.

Mourinho said only last Friday that he would be out until early February, but he replaced Paulo Gazzaniga in between the sticks.

Mourinho had mixed emotions, having dropped Gazzaniga on the back of keeping a clean sheet and saving a penalty at Watford on Saturday.

“It’s happiness to see one of the best goalkeepers in the world to be back,” he said.

“It’s a very good feeling for us but at the same time it is one of these decisions that sometimes we must have it, but it hurts. To leave Paulo out hurts.

“The good thing is that he is such a good member of the family and he is such a special friend of Hugo that I think he also shared our happiness to have Hugo back as a friend.

“For me he gave me a lot of thinking and I had to try to be cold to make a decision without emotions because to leave Paulo out is not easy.”

This was not pretty for Spurs, who even though they closed the gap on fourth-placed Chelsea to six points, they looked a side far from capable of qualifying for the Champions League.

Having led in a promising first-half performance through Alli’s 38th-minute tap-in, Norwich were in the ascendancy after Pukki’s penalty.

🗣️ Sonny: "It was a really hard game, but we got the points and this shows the character which is very important." #THFC ⚪️ #COYSpic.twitter.com/vBIG9pcFLv— Tottenham Hotspur (@SpursOfficial) January 22, 2020

But Son scored against the run of play to give Spurs a first win since Boxing Day.

“You win two or three matches in a row, so very important for us these three points,” Mourinho added.

“I think when we are playing very well, we have or we should score more goals and kill matches because then when the opponent is in control they create problems for us. You risk losing matches.

“But it was fantastic what happened after the 1-1, which happens in a difficult moment for us where I look to the bench and I don’t have attacking players to change the game the team is a little bit fatigued.”

It left Daniel Farke accepting his side need a miracle to stay up as they sit six points from safety.

The German said: “We all believe otherwise we would have raised the white flag. If someone can help working on this miracle then it is me with the lads.

“Miracles can’t just happen, you have to create them, you have to work it and our lads showed they are willing to work

“We are all disappointed, but I can’t ask the lads for more, they left their hearts out on the pitch, it was a great performance.”