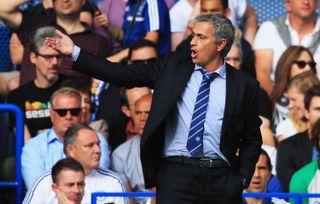 Chelsea marked Mourinho's first Premier League game since returning to Stamford Bridge with a dominant display and were quick out of the blocks against Steve Bruce's men on Sunday.

Oscar scored the opening goal of Mourinho's second coming before Frank Lampard made amends for missing an early penalty by unleashing a fierce 30-yard free-kick as Chelsea went two up inside 25 minutes.

Two goals in 12 first-half minutes provided Chelsea with the platform to run riot, but further goals did not materialise as the game petered out.

Mourinho pointed to the midweek internationals and the fact it was the opening game of the new season as the factors for Chelsea running out of steam.

"I played so many times this year and I won so many matches this year but we didn't have so many periods of such fantastic quality like we had.

"When I saw the second half going into another direction, at the beginning I was a bit frustrated because I want more.

"But after 10 minutes I was thinking and I was feeling that we didn't because we couldn't.

"We can't play that way for 90 minutes. In the second half we had no physical energy and probably no mental ability to play that way.

"The three boys behind Fernando (Torres) in the first half they were fantastic and in the second half they disappeared.

"I think they disappeared and when the creativity disappears we lose danger in our game.

"I tried to make a couple of changes but at that time the game was already bad and we sat back and our defensive block was very comfortable so the second half was not comparable to the first half but the first half was fantastic."