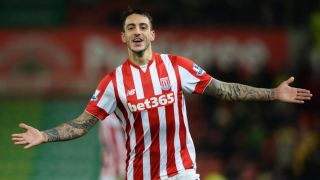 Stoke City boss Mark Hughes believes Joselu is acclimatising to English football  at just the right time after he netted in the 3-1 win over 10-man Norwich City on Wednesday.

Joselu's pinpoint drive on the edge of the box put Stoke 2-1 up at the Britannia Stadium after Jonathan Walters's opener was cancelled out by Jonathan Howson's stunning equaliser.

Ryan Bennett's own goal sealed a comfortable victory, with Gary O'Neil having been sent off after 31 minutes.

A second Premier League goal for Joselu, the close-season signing from Hannover, left Hughes full of praise for the forward.

Hughes said: "I hadn't been able to given him too many opportunities in the early part of the season, but I've just sensed of late that he's getting to grips with what's required.

"His link-up play is good, his understanding of players around him and his ability to play people in is good as well.

"But first and foremost what we see in training is his ability to strike and finish and thankfully that's come to the fore as well."

Joselu's progress comes at a good time for Stoke, who could be without playmaker Xherdan Shaqiri for up to two weeks with a hamstring injury.

"The sending off changed the shape of the game and I'm sure Norwich will feel that it affected them adversely," Hughes added.

"But we've seen examples where you go up a team that's down to 10 men and sometimes that can be more difficult.

"But we kept going and in the end Joselu's produced a great strike on the edge of the box, which we're really pleased about."