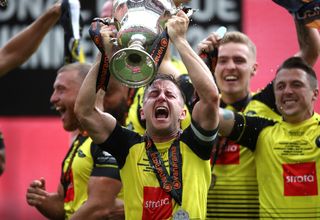 Harrogate captain Josh Falkingham will relish the chance “to show everybody what we’re all about” in Wednesday’s televised Carabao Cup tie at West Brom.

They earned their plum Carabao Cup tie at The Hawthorns by beating Tranmere in the first round and on Saturday announced their arrival in the top four divisions by winning 4-0 at Southend in their opening game.

🎬 | Here's a reminder of how we reached Round Two of the @Carabao_Cup and set up tomorrow's trip to @WBA#ProudToBeTownpic.twitter.com/OHwCLqcYUf— Harrogate Town AFC (@HarrogateTown) September 15, 2020

“Win, lose or draw, we’ll be looking to put in another performance to show everybody what we’re all about,” Falkingham told the PA news agency. “That’s the main focus.

“We’re going to enjoy it, simply. The pressure is completely off. It’s a fantastic opportunity and we’re grateful for it.

“There’s nothing to fear. We’ve just got to go into it with the belief and confidence that we’ve already built at the club.

“It is a free hit, but we’ll be fully prepared just like we were for Southend and like we will be for Walsall on Saturday.”

Harrogate’s fans are still pinching themselves after a whirlwind two months which have propelled their club on to the national stage.

Wednesday’s cup-tie at West Brom will be the first time Town have faced top-flight opposition.

“It’s been an absolute whirlwind for us as players as well,” Falkingham said. “But we’re just delighted to be playing in competitive matches and that the season is up and running.

“It was vital we kicked-off the league season with a good performance, so to get the win, scoring four goals without conceding, is fantastic.”

West Brom marked their top-flight return with a 3-0 home defeat to Leicester on Sunday, but Falkingham is under no illusions about the size of Town’s challenge.

“They had a fantastic season and managed to get promotion to the Premier League, which is great for West Brom,” he said.

“They’re Premier League new boys, but they’re such a well-established club and it’s going to be a great occasion for us going to their stadium.

“The game being on Sky Sports adds another bit for us as well. It’s one we’re really looking forward to and will relish.”