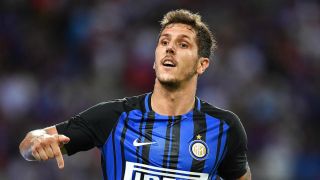 Paris Saint-Germain are reportedly on the verge of securing the stunning capture of France striker Mbappe from the Ligue 1 champions.

The 18-year-old is set to join on an initial loan deal, with PSG having obligation to buy at the end of this season for a fee understood to be €180million.

Monaco have targeted Jovetic as a player to bolster their attacking ranks and his management company Lian Sports posted a picture of the 27-year-old apparently in Monaco's dressing room.

The Instagram post, which was subsequently deleted, read: "AS Monaco is currently presenting Stevan Jovetic who will be wearing jersey #number10."

Other pictures emerged online, seemingly from the same photoshoot, which showed Jovetic to be wearing a number 10 Monaco shirt.

Mbappe was an unused substitute as Monaco thrashed Marseille 6-1 on Sunday and has not featured in Ligue 1 since the 3-2 opening-day win over Toulouse.

However, he spent the second half of last season with Sevilla, scoring seven times in 24 appearances for the Spanish club.