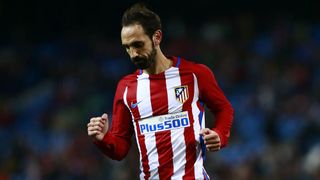 Juanfran will play in midfield when Atletico Madrid face Las Palmas in the Copa del Rey on Tuesday, but Yannick Carrasco is a doubt.

With Augusto Fernandez and Tiago still sidelined due to injury, Diego Simeone finds himself short on midfield options at the start of 2017.

The Atletico coach deployed Juanfran in a more advanced role on the right-hand side for the 4-1 Copa del Rey victory over Guijuelo last month, and confirmed he will appear in that position again in the first leg of the last 16 clash in Gran Canaria.

Simeone's decision could well be based on confirmation that Belgium international Carrasco was diagnosed with "slight peritendinitis in the left Achilles tendon", with no timeframe given for his recovery.

"We understand that Juanfran can give important things, he has always attacked very well. He is one of the team's best suppliers of assists in the past five years," Simeone told a media conference on Monday.

"It is an alternative that allows Sime [Vrsaljko] to play during his good form and strengthens the right-hand side, which has always been a bit more vulnerable.

"Saul [Niguez] has done it, [Nicolas] Gaitan also, Carrasco, who does not like to play in that position. Juanfran is going to play tomorrow [Tuesday] and he can do it."

Centre-back Jose Maria Gimenez featured in central midfield during a 3-2 friendly win over Al-Ittihad last Friday, and it is something Simeone is not averse to trying again.

He added: "Jose played there as a youngster, he has not done it for a long time.

"Anything bad that comes out of him and Juanfran playing in new positions falls on me, but I'm sure they can help there."

Reports have suggested Simeone could leave Atletico at the end of the season despite having another year on his contract, but CEO Miguel Angel Gil Marin last week insisted the coach is going nowhere.

The Argentine once again reiterated his desire to remain in position for the 2017-18 campaign.

"Like Miguel said, I have one more year on my contract and both footballers and fans will have to keep supporting me," said Simeone.