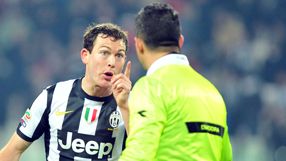 AC Milan coach Massimiliano Allegri said that without faith in the referees it would be better to stop playing and Napoli goalkeeper Morgan Di Sanctis also hit out at Juve.

"If you don't believe in the good faith of the referees... it's better to stop," Allegri told Italian media.

Juve were held 1-1 at home by lowly Genoa on Saturday and believed they should have been given a penalty in stoppage time when Andreas Granqvist kicked the ball on to his hand.

Coach Antonio Conte, whose side are three points clear of second-placed Napoli, was livid and said referee Marco Guida told him he "was not ready" to award the penalty.

"If the assistant and the fourth official both say it was a penalty then the referee can't say 'I wasn't able to give it'. That isn't football," he said before adding the incident was "shameful".

The most controversial remark came from Juventus sporting director Giuseppe Marotta who made a reference to the fact Guida comes from the Naples region.

"In the 94th minute a referee from the Naples region found himself in a difficult situation," said Marotta.

That comment was badly received especially as it was far from clear whether Granqvist's handball was intentional.

"All the gossip by the Juventus team, in my opinion, should be analysed in great detail and I hope those responsible will do so," said Di Sanctis.

Napoli coach Walter Mazzarri, whose team won 2-1 at Parma on Sunday, preferred to stay out of the row.

"I am not interested in talking about this," he said. "Once it [the season] is over I will express my opinion."