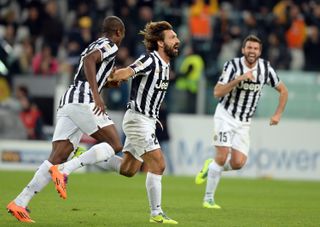 Pirlo was on target alongside team-mates Fernando Llorente and Paul Pogba as Juve - who had Angelo Ogbonna sent off late on - romped to an impressive win over Rafael Benitez's men.

With Roma dropping points at home for the first time this season on Sunday, Juventus are now just one point from the Serie A summit.

A delighted Pirlo told the club's official website: "I'm happy with my goal but especially for the win, which sends out a message to the rest of the league.

"We've cut the gap even though Roma continue to enjoy a great championship season. We just need to focus on ourselves and always try to play like we did this evening (Sunday)."

Pirlo added: "Perhaps the defeats to Fiorentina and Real Madrid were what we needed, even though we did well in Florence and were only made to pay for 10 strange minutes.

"The team is continuing to grow and we need to keep going."

Pirlo's fellow midfielder Arturo Vidal was substituted late on after feeling discomfort in the abductor muscle of his right thigh and is set to be assessed in the next few days.