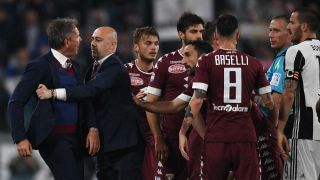 Gonzalo Higuain's 92nd-minute strike dealt a cruel blow to 10-man Torino as Juventus claimed a 1-1 draw in a thrilling Derby della Mole in Serie A.

In a frantic encounter at Juventus Stadium, Adem Ljajic's exquisite free-kick had looked set to seal a first away league victory for Torino - who also had head coach Sinisa Mihajlovic sent to the stands - against Juventus since April 1995.

However, a moment of brilliance from substitute Higuain - whose double against Monaco last time out put Juve in pole position to reach the Champions League final - salvaged a point to nudge Massimiliano Allegri's side closer to retaining the title.

Torino fought valiantly, though, and it was not until Higuain spun his marker to unleash a venomous drive past Joe Hart that their hopes were shattered.

The draw ensures that Juve, who lead second-placed Napoli by eight points, extend their remarkable unbeaten home run in Serie A to 34 matches and moves them a step closer to a sixth straight Scudetto crown.

Indeed, it was from a corner that Juve went close to opening the scoring as Benatia headed Dybala's wicked delivery against the woodwork - Leonardo Bonucci unable to convert on the rebound.

Restored to a more familiar central role in place of Higuain, Mandzukic was the next to go close, the Croatia striker unable to direct Juan Cuadrado's terrific cross on target.

For all Juve's dominance, Hart was not truly tested until just prior to half-time, the Manchester City loanee charging out to deny Dybala after the Argentine had combined excellently with Mandzukic.

Despite Juve's attacking prowess, though, Allegri's side found themselves behind seven minutes into the second half.

Iago Falque drew a clumsy foul from Kwadwo Asamoah 25 yards out and Ljajic made Juve pay with a sublime free-kick that nestled into the top-left corner, leaving stand-in goalkeeper Neto stranded to the spot.

Mandzukic looked set to restore parity almost immediately, only for the former Atletico Madrid man to skew his effort wide after getting one-on-one with Hart.

Juve were handed a lifeline minutes later though, Acquah picking up a second yellow card for what seemed a perfectly timed challenge on Mandzukic - with Torino boss Mihajlovic also receiving his marching orders for his reaction to the decision.

Allegri's side quickly looked to make their numerical advantage count, but both Tomas Rincon and Sami Khedira failed to hit the target from gilt-edged chances.

Juve flooded forward and finally had their rewards when Higuain engineered space for himself on the edge of the area with a clever turn, drilling a blistering strike into the bottom-left corner to earn Allegri's side a share of the spoils.