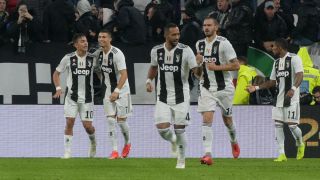 Paulo Dybala scored after just 42 seconds as Juventus recorded their best start to a Serie A season with a 3-1 victory over Cagliari at the Allianz Stadium.

Argentina international Dybala scored Juve's quickest Serie A goal in six years to put the hosts en route to a win that gives them 31 points after 11 top-flight matches – their best tally at this stage of a campaign.

Joao Pedro pulled Cagliari level in the 36th minute but an own goal from Filip Bradaric 125 seconds later gave the hosts an advantage they would not relinquish.

Cristiano Ronaldo was presented before the match with a commemorative shirt by Juve president Andrea Agnelli for scoring his 400th goal in Europe's top five leagues against Genoa last month, and the Portugal captain laid on a late third for substitute Juan Cuadrado.

Dybala got Juventus off to a brilliant start when he turned Fabio Pisacane and Luca Ceppitelli on the edge of the box and fired into the bottom-right corner despite losing his footing.

Cagliari were refused a penalty by referee Maurizio Mariani, who checked replays of Medhi Benatia heading the ball against his hand inside the box in the 18th minute, and only a brilliant Wojciech Szczesny save kept Leonardo Pavoletti out.

The Juve goalkeeper was unable to stop Joao Pedro firing inside the near post, but Cagliari were only level for two minutes. Bradaric inadvertently sent the ball into his own net when trying to intercept Douglas Costa's cutback.

Bradaric was fortunate not to concede a penalty for appearing to control the ball with his arm in the box, before Ronaldo thundered a shot from the left side of the area against the upright in stoppage time.

Massimiliano Allegri replaced Costa with Cuadrado for the second half and Juve found it tough to create more chances, but the Colombian finally added to their tally three minutes from time to stave off a potentially tense finale.

What it means? Juve rolling onto more history

The Bianconeri have already won seven straight Scudetti and you would have to be brave to consider any other team for the title in 2018-19 following their blistering start. Allegri's team have matched the record points total for this stage of a Serie A season and it is going to take something truly special to stop them marching on to Serie A glory once again.

Rodrigo Bentancur's interception proved key to Dybala's opener inside the first minute, and the Uruguayan put in another brilliant display in central midfield. He made a total of six interceptions and regained possession eight times for his team, making him pivotal to Juve's dominance in Turin. Cuadrado's goal ensured Bentancur flashing over the bar from inside the six-yard box in the 84th minute did not prove too costly.

Mariani backs out of penalty call

The ball striking Benatia's arm after his header could well have been given as a penalty by a sterner referee, but Mariani opted against punishing the league leaders for the unintentional handball. That perhaps weighed on his mind when he maintained his decision – despite the benefit of being able to watch replays – not to give the home side a spot-kick for what appeared to be a clear use of the arm to control the ball by Bradaric towards the end of the first half.

- Juve have equalled the best points total (with three awarded for a win) after 11 Serie A matches, but Roma in 2013-14 and Napoli in 2017-18 failed to go on to lift the trophy.
- Joao Pedro's goal ended a wait of 401 minutes for Cagliari to score against Juve in the top flight.
- All the 14 goals conceded by Cagliari in Serie A this season have come from inside the box.

Juventus will clinch their place in the Champions League knockout rounds if they win at home against Manchester United on Wednesday, while Cagliari's attention will turn to a trip to SPAL next weekend.