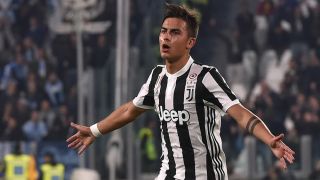 Juventus kept the pressure on Serie A leaders Napoli with a 4-1 win over struggling SPAL at the Allianz Stadium on Wednesday.

Spectacular first-half goals from Federico Bernardeschi and Paulo Dybala set the champions on course for back-to-back league wins, before Gonzalo Higuain and Juan Cuadrado struck after the break.

Alberto Paloschi had given SPAL hope of a comeback by making it 2-1 but they saw a potential equaliser disallowed for offside and have now picked up just one point from their last eight games to sit second-from-bottom of the table.

Bernardeschi's stunning volley put Juve ahead early on and another fine free-kick from Dybala doubled the lead after only 22 minutes, as Massimiliano Allegri's side threatened a repeat of the goalscoring form they showed in the 6-2 thrashing of Udinese last time out.

SPAL recovered from their early jitters to make life more difficult but their heads dropped again when Higuain and Cuadrado scored in quick succession not long after the disallowed goal, and only a belated offside call denied the Argentina striker what would have been his 100th Serie A goal late on.

There was even a chance for Claudio Marchisio to make his first appearance since the opening-day win over Cagliari, the midfielder having recovered at last from a knee injury, as Juve cruised to the win that keeps them three points behind Napoli.

SPAL did well to withstand Juve's early pressure until Bernardeschi broke the deadlock with a moment of brilliance. Douglas Costa cushioned Dybala's low cross into the winger's path and he unleashed a superb volley that sailed into the top-left corner of the net.

The move was Dybala's only real bright spot in a quiet opening but, not to be undone by Bernardeschi, the Argentina star doubled his side's lead after 22 minutes with a sublime free-kick from 25 yards out that curled high into the right of Alfred Gomis' goal.

The champions were in control until Paloschi halved the deficit 12 minutes before the break, the striker reacting well to prod Federico Mattiello's mishit half-volley into the net from six yards out.

SPAL started the second half with the confidence with which they finished the first and they thought they had equalised through Marios Oikonomou, only for the goal to be ruled out for an offside infringement by Paloschi after VAR consultation.

Any threat of a fightback was effectively killed off with 25 minutes remaining, however, as Higuain smashed the ball left-footed into the bottom-right corner for his fourth league goal of the season after SPAL had failed to clear the area following a corner.

Juve could finally relax and they soon added a fourth, the lively Costa crossing for substitute Cuadrado to head home at the far post, despite Gomis' efforts to parry the ball away.

Higuain was denied a landmark goal late on after a VAR check, but Allegri's side eased to a win that keeps them third third, behind Inter and Napoli, ahead of Saturday's trip to San Siro to take on AC Milan.